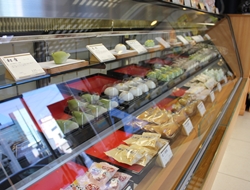 A long-established Japanese confectionery, founded in 1870, which sells a variety of Japanese confectionary in addition to the famous yokan and also has a rest space on the second floor.
In the late Edo era, the name of the shop was changed to Gokatteya due to making sweets using the beans harvested in Gokatte Village (now part of Esashi) in southern Hokkaido.
Gokaete is an Ainu word called "Kokaite", meaning a place where waves are visible or where waves are standing.