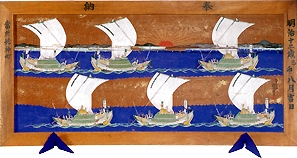 Long ago, a black horse was to be offered to the gods to ask for rain whereas a white horse was to be offered to ask for sun and for the rain to stop. Somewhere along the line, living horses were substituted by "Ema (horse illustration)." The letter "め" was written to pray away optic ailments (め is phonetically identical to 目 meaning eye). Those leaving port would pray for safe sailing, and upon returning to port without harm, a Funa-ema was given as a votive offering as a sign of joy and gratitude. The one framed at Ubagamidaijingu Shrine prouldy displays six vessels. Its composition is quite similar to the illustration of the Kitamae-bune (northern-bound ships) that the Omi-merchant Nishikawa Denemon deposited at Enmanji Temple as a votive offering. The sea and sky commands both an eternal admiration and fear. The people smile at good fortune, but will prostrate to the gods or Buddha during adversity. It is not merely about worshipping the great power of nature, but a ritual to reaffirm the blood bond between the parents of parents and the ancestral souls that came even before them. Along the shores are solemn, ancient temples, shrines, and numerous Hokora (miniature shrines); aptly a land of gods and a village of Buddha. Excerpt from "Kitamaebune - Japanese culture and Esashi -"