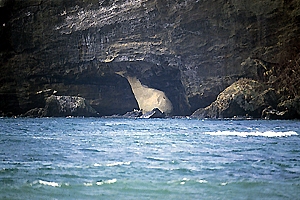 After crossing the sea to Esashi, Yoshitsune was living with the chief Sitakabe. Yoshitsune, worried with love for Fumiki, decided to leave secretly one night. Other than Benkei and his entourage, he had a white horse that was his favorite. When Yoshitsune went to Arima beach (Tsugaru Sanroku) for heading to Ezo island (Hokkaido), the sea of Tsugaru was rough and the waves would not calm down. He prayed to Kannonbosatsu for 3 days and 3 nights. On the 3rd night, the old white-haired woman appeared and gave him a white horse. The white horse was one of three white Ryuba (Dragon Horse).
Yoshitsune had received an Isen (western style ship) from Shitakabe, and voyaged to the far side of Ezo island. Yoshitsune was unable to get the white horse from the mysterious old woman from Arima beach onto the ship. He decided to leave it in Esashi, and he tied the white Ryuba in the shadow of Kamomejima island after saying good bye.
Yoshitsune and his party left Esashi.
After that, the white Ryuba was waiting for Yoshitsune's return through rainy days and windy days, but he never returned.
Oneday, the white Ryuba had turned into a white rock. It looks, however, as if it is raising its neck and is neighing. Later people began to call it Uma Iwa (Horse rock). If you cross the embankment of Kamomejima island and walk along the path that passes through the hole in the rock , and look west from Ebisu beach, you will see a white rock that looks as if it is living.
Seeing it from a distance, the head is very thin and it seems it is attached to the rock wall. But when you get close to it by boat, it sits on the water surface with a shape very similar to a horse.
In the summer, you can get closer to it by walking along the rock after turning left at the shore of Kamomejima island.