Esashi replaced Kaminokuni as the center of Hokkaido economy because it was a naturally good port. What resembles a seagull spreading its wings when viewed from above is Kamomejima Island, which obstructs the strong winds and powerful waves coming from the open ocean, offering a refuge for boats. Kamomejima Island lies 20m above sea level on average. Its circumference is 2.6km. Although it is now connected to the land by a breakwater, in the past, boats were required to cross over. In front of the island is Heishi Rock resembling an upsidedown tokkuri (bottle for Japanese rice wine) and on the island is Itsukushima Shrine built over 380 years agi, Uma Iwa (Horse Rock) from the Yoshitsune legend, and the Esashi Oiwake Monument. However, it is believed that the master of Kamomejima Island is neither a horse nor seagull, but a giant octopus. Long ago, at Shibino Misaki in Otobe, there lived a giant octopus. On one sunny day, the giant octupus had two of its arms wrapped around a large tree to sunbathe. Seeing this, a giant snake remarked, "I don't much care for an octopus coming on to the land to nap" quickly looking for a fight. Initially the octopus faced its opponent with just two arms, until the situation began to look unfavourable, and it used an additional two arms. But the outcome of the fight was still unclear. So the octopus employed even more of its arms. The snake wrapped its tail around a tree and furiously bit into the octopus's arms. Feeling cornered, the octopus spat out its signature ink, and fought back from out of sight, until it finally overcame the giant snake. Following this, the giant octopus moved to Esashi. Shortly after, in Esashi, the Zenshu Shogakuin Shrine was looking to recieve a hanging bell from Osaka. Just as the Benzaisen (cargo ship) carrying the hanging bell was about to make port from Kamomejima Island, the ship came to a stubborn halt. Then, a bizarre bubbling sound was heard from within the ocean, and as the seawater rose up like a small mountain, a titanic octopus of unseen or unheard-of size emerged, and made its way up onto the ship. Sparing just a glance at the sailors who just stood there unable to voice a word in shock, the octopus wrapped its arms around the hanging bell, and stole into the sea the cargo that was so painstakingly brought over. Meanwhile, at the Shogakuin Shrine atop the mountain, the townsfolk awaiting the arrival of the hanging bell had amassed. Receiving no news of the hanging bell's arrival whatsoever, they headed down to the port and saw that it was in an uproar as if it had been flipped upside-down. Having been informed of the situation, the townsfolk requested that a popular priest (of Japanese religion) go and determine the reason for why the hanging bell was stolen. When the boat arrived at the spot where the octopus had emerged, the priest immediately began to pray. Then the face of the octopus, with a diameter of four Shaku (about 1.3m), appeared. 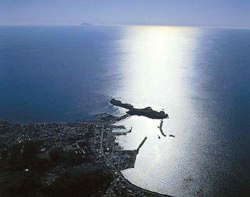 "That you should steal something from man who is lord of all creation. I will hear your reason for doing so" the priest interrogated. "I am the female octopus who once lived at Shibino Misaki north of here. A short time ago, I victoriously fought against the giant snake who lived above, and I came to Kamomejima Island to be a bride as a reward, but being a newcomer I did not know where to hide the hat atop my head. As I pondered what to do, a ship carrying the hanging bell passed by, and I thought that good fortune had come along, because if I were to keep my hat inside this bell, there would be no worry of the other fish taking it, and I couldn't help stealing the bell. After the priest finished listening to the story, he thought that forcing the giant octopus to return the bell would anger her, and fearing what repercussions that might have, discussed it with the Buddhist priest and townsfolk who had come along on the boat, whereupon they decided to just give her the hanging bell. Ever since, at Kamomejima Island, octopus fishing continued to be bountiful. The giant octopus still reigns over Kamomejima Island, and swims laps with the Shogakuin Shrine hanging bell atop her head, and on days when the sea is particularly calm, it is said the canons of the hanging bell are still seen.

Kamomejima Island is an island of legends, and tales other than that of the Giant Octopus such as the following have been told. 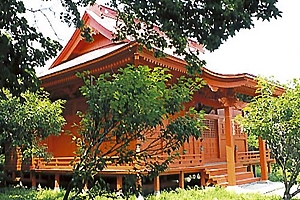 Itsukushima Shrine on Kamomejime Island was known as "Bentensha" until it was renamed "Itsukushima Shrine" in 1868. Its establishment is estimated to have been somewhere between 1716 and 1736. The deity here was known as "Yarazu (uncharitable) no Myojin (deity)." This Myojin was very miserly when it came to money. Those who came to the Ezo (another word for Hokkaido) lands from afar for the herring industry, regardless of how much coin they saved, were not allowed to return to their homelands before setting foot in the Myojin's territory and spending all they had earned. Those who defied the diety's wishes, without exception, found themselves facing a disasterous return trip.