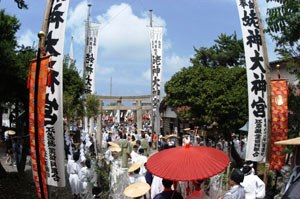 August is special as the most awaited month of the year for the people of Esashi. Here in Esashi, the heart of the year is not the Bon Festival or New Year’s Day, but the 9th, 10th, and 11th August when the "Esashi Ubagamidaijingu Shrine Togyo Festival" is held. This goes for all the people who have left Esashi and live in other cities as well. A common exchange between the Esashi people from all over Japan is, "Are you returning for this year's Ubagami festival?" Three days of excitement convey the history of the oldest festival in Hokkaido.

We introduce it all in the following. 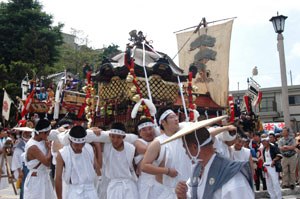 The Togyo begins on the 10th and 11th of the main festival at 1:00 pm and noon respectively. The procession of Sarutahiko takes the lead, followed by three palanquins and imperial carriages, and finally thirteen gorgeous floats parade through town. When the procession passes by, if things such as a household's laundry are visible or people look down at the procession from a second story window, Sarutahiko will sit down on the spot and refuse to move. The procession will travel through the town as it stops and proceeds as Sarutahiko desires. 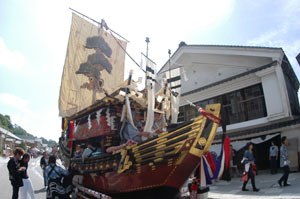 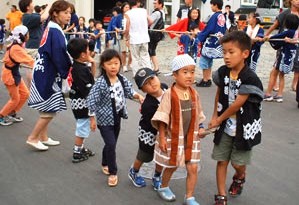 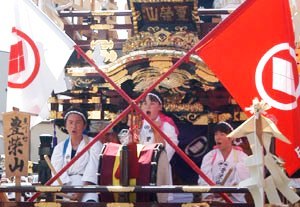 During the procession, the festival music of flutes and drums is very lively. This festival music incorporates the flow of the Kyoto Gion Festival. "Tateyama" is played when stopping at a shrine or house, "Ikiyama" is played when travelling ahead, and "Kaeriyama" is played when returning to town. Furthermore, the "Tateyama, Ikiyama, and Kaeriyama" have a unique tone for each parade float. Every year, a "Festival Music Competition" is held, and the music gets even more energetic along the route between the front of the shrine to the front of the Esashi Town Meeting Hall (Former Town Office) where the scores are assigned. 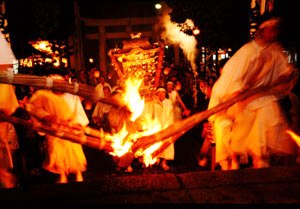 The highlight of the evening ritual is the “yadoire (return)" where the palanquins return to the shrine. Eight Shirochoji run up the shrine path with torches, as if the purify it, before the palanquins also rush the stone steps. However, one trip is not sufficient to please the deities so the first palanquin goes back and forth seven times, the second one five times, and the third "Motomiya" finally returns to the shrine on the third time. Seven, five, and three are numbers of fortune. The running back and forth is a feat of strength and the energy of the viewers and the bearers electrify the atmosphere. 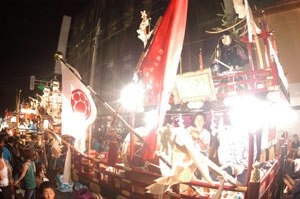 The climax of this festival is the final night of the main festival on the 11th. As the palanquins return to the shrine under a clear night sky, the parade floats gather at the crossroads in front of Hotel New Esashi. The street broadcast speakers scream the name of each parade float. The roadside is full of people. The competition of "Tateyama" music continues with people shouting "enya, enya!", the sound of powerful drums, and people jumping up and down. The taiko drums will be hit like they have been ignited and the enthusiasm and delight of the people will form a whirlwind of burning light and sound that rushes up the Esashi night sky. The finale of the climax is the majestic tone of the "Kiri Voice (Okiyo Ondo)." The excitement that reached a peak calms down to a unique sadness of the festival coming to an end in a quiet celebration of words. Some crouch down on the road in lethargy. A longing for the sound of festival music that can be heard from afar. The sadness of the festival coming to a close. The people of Esashi begin to feel autumn just around the corner.