As if to express anticipation for the long-awaited summer vacation, the sound of the festival flutes and drums flow from all around the town. There is a strange sense of restlessness and it is difficult to stay still. The wives are moving around preparing for their children and grandchildren. A unique excitement is felt in the veins of the Esashi people. The festival music is a lullaby that raised the people of Esashi.

Matsuribayashi (music of the festival)

Each parade floats is decorated to symbolize god, accompanies the palanquins, and travels to the rhythm of the Hayashi music played by each parade floats's unique flutes and drums and the shouting of "Yoi Yoi." The Esashi festival music is original to each parade floats and gets handed down. There are three types of music: "Ikiyama, Tateyama, and Kaeriyama (also called modoriyama)." Ikiyama has a smooth rhythm among the Hayashi and is played for when the procession is moving. Tateyama is majestic and is played at "otabisho (where the sacred palanquins are lodged)" and "tateba (shrine)" as a musical tribute to god. Kaeriyama has a rapid tempo and is played when the procession line is broken for the return trip. 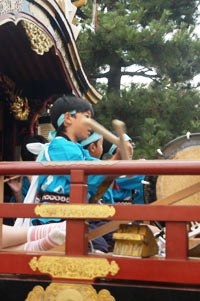 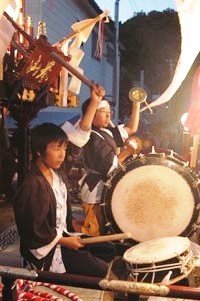 The Hayashi music of each parade floats is said to be unique, but this is in regard to the finer points of the songs such as modifications to rhythm and drumming technique; the overall tone has remained unified. The formation of these Hayashi songs is thought to have come from several types. The general basis for the music appears to lie in the relatively old songs of Jinguyama/Ebisuyama, Honenyama/Nankoyama, and Matsuhomaru. This, however, has not been fully determined. The first type has a relatively slow, deliberate rhythm close to the tone of Gionbayashi and, in the present day, is observed with slight differences in the drumming patterns for Jinguyama and Ebisuyama resulting in little more than having noticeable parts of the song where “ikiyama” and “tateyama” have been substituted. Shineiyama/Hoeiyama were built later and independently rearranged the Hayashi music of Jinguyama and Ebisuyama, but the style has remained the same. The second type, Honenyama and Nankoyama, has a livelier overall tone compared to the former, with modifications to the rhythm that demand high drumming techniques. The accompanying shouts have also been changed to further emphasize presence. The influence can also be seen in Seitakeyama/Genjiyama. On the other hand, Seishoyama, Masamuneyama, and Gikoyama are closer to the first type. The third type is of Matsuhomaru’s hayashi music which has a lively and majestic tone resulting in a unique atmosphere. In general, the "kaeriyama" shares commonalities among the Yama, but in the area where Funayama is held, the Hayashi music has become independent and separate as an arrangement of Funayama. Since 1978, the festival has been holding a “Festival Hayashi (Music) Competition” in an effort to the traditions of the music.
It is an honor to be a player of the flute or a drum of the parade floats, but only those who have attained recognizable abilities through hard practice are able to play on the Yama. It was a privilege formerly reserved for men, but nowadays depopulation and awareness of gender equality have permeated and the number of female players has increased. 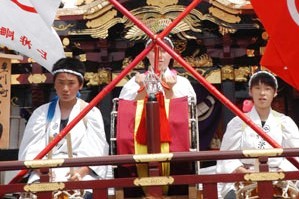 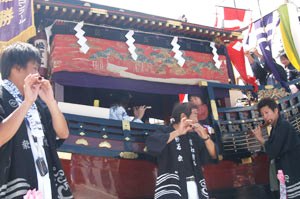 Each parade floats sings out a call of "Yoi Yooi" or "Yoyamakase" to the rhythm to the Hayashi music to further liven the atmophere. In addition, Matsuhomaru, Homareyama, Nankoyama, Honenyama continue a traditional act called "tsuna-ire" to symbolize the brave men at sea. This act is based on the “Esashi Okiage Ondo” and originates from the tradition of herring fishing. The young people who are dedicated to the parade floats place towropes in the houses of merchants, and others involved, to celebrate peace and prosperity while calling out in a "Kirigoe (tsunaokoshi ondo)." Originally a celebration that began with Matsuhomaru, the merchant district celebrated the prosperity of the Kitamae ship trade and invited the boatman to disembark and be welcomed at the parlor. At the storefront, young people would imbue the spirit of the sea man by shouting the "kirigoe" and participated in eating and drinking to celebrate commercial success and household safety. This tradition has been passed down to the parade floats associated with many fishermen families and is preserved to this day 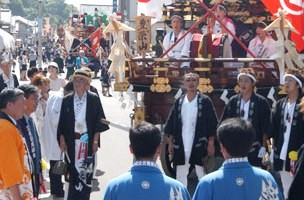 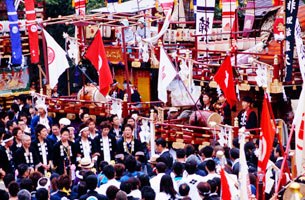 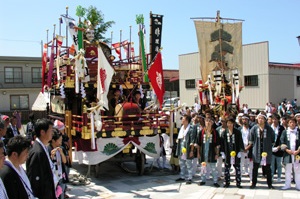 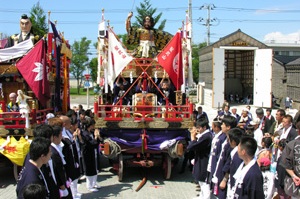