The history of Ubagamidaijingu Shrine

Although the details of how Ubagamidaijingu Shrine was founded is not known, it begins with a legend that has been handed down for many years. One day, an Uba (old woman) came to Esashi out of nowhere and tied a thatched house together in Tsubanacho. It is said that the Ezo land at the time was cold and difficult to farm, leading to starvation and death for some people. It was under these circumstances that Uba came to be known as Orii-sama and was respected as a deity because she could prophesize catastrophe. One night,a rainbow light from Kamuishiri (Kamuishiri = now known as Kamomejima Island) illuminated the thatched hut. Bewildered, the Uba goes to investigate and find a white-haired Okina (old man) sat upon a rock who said, "I have been waiting for you to come.” He handed her a small bottle and explained, “There is water in this bottle. Drop it in the sea and it shall bring a school of small fish, known as Nishin (herring), that the islanders shall use as a resource for food and a means to provide clothing and shelter. We will oversee and protect the islanders together for years to come." And with this proclamation, the old man vanished as did his open fire. Orii-sama poured the water from the bottle into the sea, as she was told, and the seawater turned white with schools of herring that swarmed and saved the people from hunger and cold. Eventually Ori-sama also disappeared, leaving behind the totems of the central gods (Amaterasu-omikami, Amanokoyane-gami, Sumiyoshi-sanjin) in the thatched house and the people built a small shrine in her honour as “Uba-ga-kami (Uba is god).” The first Fujiwara Eitake subsequently visits this shrine for worship. The herring continued to swarm, every year people from the mainland of Japan crossed over to Esashi, and Esashi became the center of economy as it became known as the place where “the silver gathers.” Ubagamidaijingu Shrine was also known as Hokkaikaisokami and Mutsu-no-kuni Matsumae Ichinomiya. In 1644, the shrine was moved from the land of Tsubana-cho to its present location, and it is believed that the Togyo festival began around this time. In 1817, the 119th Emperor of Japan, Koukaku summoned Masamitsu Fujieda, the 10th Great Priest/Premier of Sagami (who also had the awarded title of Jugoika) in attendance with Lord Karahashi Dainagon ( Dainagon was a counselor of first rank in the Imperial court of Japan), and granted the high ranking award of Shoichii and the permission of use of the name of Daijingu. The priests have been granted the title of Jugoika and positions of Premier of Bungo or Sagami areas for all generations. 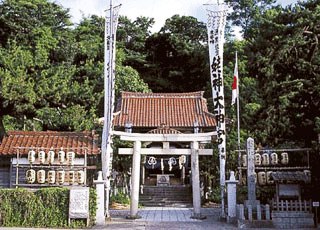 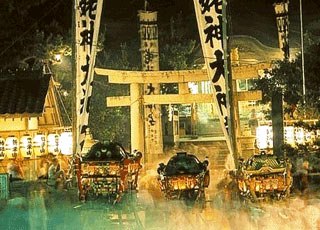 Ubagamiaijingu Shrine has been at its current site, at the foot of Iwasaki, since 1644 and the main worship hall was built in 1774. From this historical fact, the area was named Ubagami-cho (town). The festival at Ubagami Daijingu Shrine is a festival in which a procession of floats accompanies the palanquins to pray for good harvest, good fishing, and good health. From what time this type of festival has been held has been a long-standing question. The book "Shachidenkihikae (Fujiedake document)” states, "A local festival of Ubajin Bentenryosha festival, August 14 (Mikoshiarai) 15th (Ryushudaisan), 15-16 (Shinyotogyo)" but the origins remain old and unclear. The oldest of the current floats (Yama) dedicated to the procession of palanquins is Jinguyama, a designated tangible folk cultural heritage of Atagonomachi, with a doll from 1754 and a mizuhikimaku (special, traditional Japanese curtain) from 1761 which Matsuo Shichirobe acquired in Kyoto. It can be inferred that by the Horeki period (1751 – 1764) the Togyo festival had taken shape. Descriptions of the traveling procession is clearly documented in “Ryosha-osairei-gyoretsu-namishukuware-hikae (Sekikawake document)” as a large event involving over a thousand people in a dignified and majestic atmosphere. 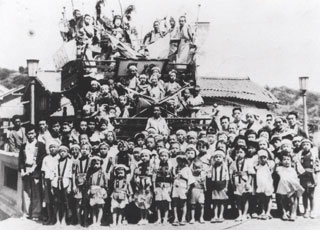 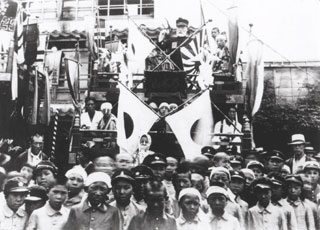 "Yama" refers to the float that is dedicated to the palanquins in Esashi because it follows the traditions of the Kyoto Gion Festival. Similar to the Yamaboko of the Gion Festival, Yama represents a sacred area where the gods descend to the Aoki (fir) and pillars of the float. The name is also meant to be a distinction from the Edo-style festival, in which puppetry, dances, and kabuki are performed on moving floats called “Dashi.” In Esashi, a single Aoki (fir) is set up on the roof of the and used as a divine totem. Erecting this Aoki is called "Yama-wo-tateru (raise the Yama; also called a hobashira – mast - on Funayama -boat Yama).” The Aoki is erected through a dance of representing three fawns and the act symbolizes god descending to spiritually reside in the totem. A photograph of Seibuzan (present day Hashimoto-cho) taken during the 30’s of the Meiji period (late 1890’s to early 1900’s) shows an Aoki, the symbol of Yama, rises higher than a two-story storehouse. This was the original form of Yama. However, when the electricity company was founded in 1915, electric wires were stretched over poles set up on the road and the tall floats (yama) could not pass; thus, the floats (yama) had to be modified to be shorter. Furthermore, religion has changed in recent years, and the doll formerly attached as a guardian deity of Yama has become the center of attention and now erecting the Yama is done because "It is a tradition to build Yama.” The Yomiya (evening festival) is an important ritual where the Yama receives the spirit of god and serves as a moving shrine.

Origins of the floats (Yama)

The festival of the Ubagamidaijingu Shrine was practiced as the Ubagami Bentenryosha Festival until 1862 as the Fujiedake document “Diary of the Ubajingu Shrine Evening Festival in July of the first year of Genji (1864)” states: “Ubagami religious festival Bentenryosha practiced both day on August 15th and 16th biannually.” From the following year, Ubagami Shrine held the festival on August 15th and 16th whereas Bentensha held theirs on May 26th and 27th. According to the aforementioned diary of festivals, Ubagami Shrine’s regular festival was not practiced, so as to start from 1863, the opinions of the shrine parishioners were unified, and permission was gained from the Esashi magistrate to hold the first Ubagami Festival following the separation from Bentensha. The procession of that year was large with more than 1,000 attendees (Sekikawake document – August, first year of Genji). The number of floats (Yama) that were dedicated to the procession of palanquins at this year's Ubagami Festival was seven (currently there are thirteen), and three of them have remain unchanged: Jinguyama, Ebisuyama, and Matsuhomaru. There have been various modifications to the floats from each town before finally reaching their current form and beginning of their construction appears to coincide with the development of the town itself. According at the diary of the Ubajingu Festival from the first year of the Genji era, the festival up to this year was held with donations from Esashi City’s middle and upper merchants through a mutual credit among those in the “Tokiwa-ko,” but starting from the first year of Keio the festival was supported by offerings from the various towns. The traditional floats (Yama) up to this point were offered by the major merchants (oyakata) living in each town who also covered all the expenses of the festival. The people of the town would dress identically to the merchant, in short coats bearing the merchant’s seal, when they accompanied the Yama. It was from these circumstances, that in the first year of Keio, the ownership of the Yama was essentially transferred to the town, and its preservation and management was left to the residents. There are several patterns to the origins of the floats. The dazzling and gorgeous floats (Yama) that are preserved and handed down by each town today have undergone several changes whereby at first, many started as quickly built floats consisting of a herring fishing boat attached to a cart with a doll placed on top. The time at which the dolls and accessories were obtained do not all date back to when the Yama were constructed, but over periods of temporary and rapid construction, thus, it is not possible to determine exact dates for when they were made. 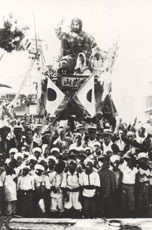 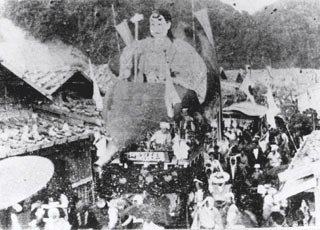 The Aoki (Fir) is erected on the roof of the float, a shrine is set up in the image of a standing forest and deep mountain, and a doll is displayed in front of it. In the original essence of the Yama, the Aoki is the main feature and dolls are placed as guardians, subordinates, incarnations. It is a symbol in each town and is deified by the inhabitants. In the tradition of decorating the floats, a woman's round belt is displayed at the back of the Yama as a “wata-no-ohata (flag of cotton).” This is to wish for good fishing, originating from a tradition of wishing for a good harvest, and is reminiscent of a faith from folk customs. The cotton flag of Jinguyama is an artifact (Denshokkowata) and is a designated Hokkaido cultural heritage. Yama, Gohei (wands made of wood and paper used in Shinto rituals), dolls, cotton flags, and Yamagaku are all main components of the Yama decorations, but also on display are specially made colorful flags dyed in patterns, five-colored streamers, lanterns on the exterior, and gorgeous Mizuhikimaku (traditional decorative Japanese curtains) on all sides except the front. When the 13 Yamas accompany the palanquins in the processions, they are seen drifting with the cotton flags fluttering along the golden metal fittings and vermillion bodies of the floats. It is like a wide picture scroll unravelling when the procession travels through the town to the festival music with elements of Gionbayashi. The most popular of the Yama dolls in each town are the warrior dolls of Takeda Shingen, Kusunoki Masashige, Oishi Yoshi, Mito Mitsukuni, Kato Kiyomasa, Date Masamune, but the diverse array of dolls also includes the mythical Ninigo-no-mikoto, Emperor Jinmu, Ebisu, Jinkokogo of Japanese Noh masks, Yamato Takeru from Bunraku, twelve types of Masashibo Benkei from Kabuki, and Matsuhomaru the trading barge. Although no longer seen today, until the end of the Taisho era (1912 – 1926), the procession of floats (Yama) was followed by the town’s children who would also put on performances. In general, old merchant houses would have sets of armor in the manner of warlords for the boys and those aged between 5 and 10 years old, mainly the heirs, would wear their own inherited armor along with a short coat with the family emblem and joined the procession accompanied by two companions. 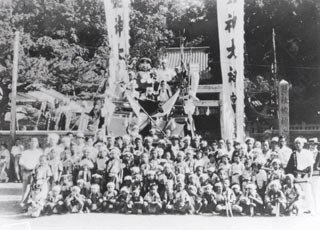 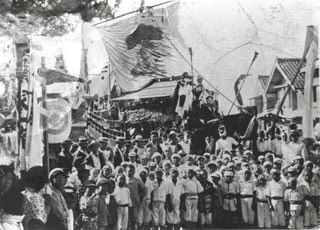