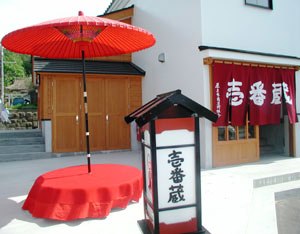 This warehouse was created by joining 2 different warehouses; one has a wodden truss structure imported after the Meiji era and a Japanese roof structure that was being used before the Meiji era.

The construction year of each warehouse is unclear. However, in the Meiji period, it was used as a warehouse of Kitayama HASHIKE with the house name of "NAKA ICHI", and a component with the house name "NAKA ICHI" was hung on a beam in the warehouse with the Japanese roof. HASHIKE was not a middleman for shallow craft ships like KITAMAE merchant ships, it was delivering the baggage of cargo ships anchored offshore because it was difficult for deep draft ships to enter into the harbor.

There was a Kanbayashi shipping shop at the Ubagami shrine side of this warehouse. The shop was run by Omi merchants, and handled dried goods stuffed into a straw bag, during the time of Kitamae merchant shipping.

The road in front of this warehouse is one of the three streets called Hirokoji, which was between the building of the neighboring house and the warehouse as the road connecting the old road and the seaside (the current national road is at the beach). Hirokoji was said to be a fire prevention measure for the domain of Matsumae that served as a fire prevention line in the downtown area of Esashi where fires often broke out.

Originally, Ubagamicho was named in 1644 due to Ubagamidaijingu shrine which was moved from Tsubanacho to the current place. It was located in the center of the Esashi harbor and is said that it is the birthplace of Esashi. Until the 1750's, most of the economic leaders were Omi merchants and Ubagamicho was the center of business among shops run by traders, inn's owners, shipping agents and merchants.

After that, between 1789-1804, merchants who were mainly from Noto and Echigo area came and settled. This grew Esashi's economy. The town became the stage for the golden age of KITAMAE cargo shipping until the end,which was in the middle of the Edo era. 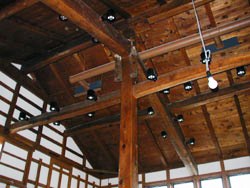 Esashi Town has an ongoing project of restoring Esashi to be "A town based on history", the "INISHIE roadway" in which the warehouse is located was designated in 1989 as a model district. Streets, parks, parking lots, electronic poles (which have been moved underground), shops in the shopping area and general houses are maintained by a unifying image. Now this maintenace has been completed for the most part. The warehouse is now a facility for tourists / visitors to Esashi and a rest space. For local people to improve the towns image, and show and sell their specialties.

Photo <ceiling in the hall>
The wood used in the old warehouse. 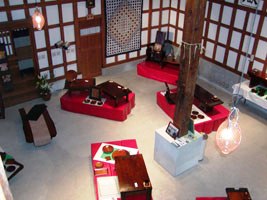 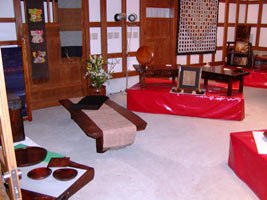 Please visit us here for various seasonal exhibitions and a tearoom.