The Eight Views of Esashi 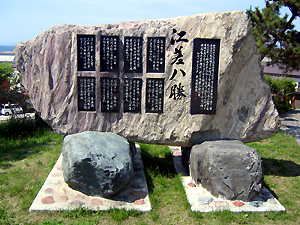 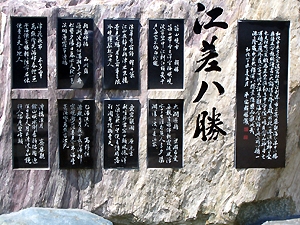 Summary of the Monument

Scale of the Monument

Writing on the Monument

Erection of the Monument 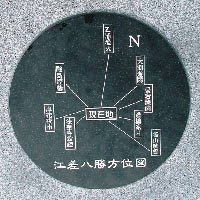 May, 1847, an elegant gathering was held to compose the place of a superb view, the Eight Views of Esashi.
The 8 poems by Mikisaburo Rai (Jyun), Nittai Shaku, Tasuku Nishikawa, Tan Honda ,Zonai Yanaze, Genkei Hara, Ken Takano, Oshu Saito (Kankai), were given to Oshu Saito, written by Mikisaburo Rai and presented the large framed work to the Ubagami Temple to receive many prayers for the prosperity of Esashi Port.
This monument honors the achievements in poetry composition of the eight poets, and was erected to convey the prosperity of Esashi in history.

During the Short Stay in Esashi

It is thought that many have heard the line "Bensei-shukushuku yoru kawawo wataru" (crossing a river in the night, making even horse-whipping sound smaller) from the Chinese poem by Sannyo Rai. Mikisaburo was born as the third child of Sannyo Rai in Kyoto in May, 1825. It was in September, 1846 that Mikisaburo visited the Saitos of Esashi and left to see the eastern Ezo area in July of the next year. It deepened the exchange with many writers despite this short period and they were able to fully show their poetic genius with their works including "1 Day, 100 Poems" and " the Eight Views of Esashi". For Mikisaburo and his eventful life, this may have been his "Shangri-la in the North".

Through the efforts of senoir citizen of Esashi Sajima Saito (Sakuzaemon, Kanzo, Oshu, Kankai, Kan) Takeshiro Matsuura (age 29) as Unpei, manservant of Dr. Shunan Nishikawa of Esashi, who began exploring Sakhalin and Shiretoko, and returned home to Esashi, Mikisaburo Rai (age 22) who by chance came to Esashi for sightseeing, Esashi writers Shunan Nishikawa, and Kensai Kikuchi got along well together. By the grace of the writers having Oshu serve as a point of contact, on 14th October, 1846 (in the lunar calendar it is the day before the winter solstice when the daylight is the shortest) the elegant meeting of the 1 day, 100 marks, 100 poems was held at the restaurant called Unseikirou (at the back landing of Ubagamidaijingu Shrine, Esashi Kamimachi) which was Oshu's family business. The meeting was held with gratitude to the head of the fellowship (Oshu) who had been great help in the endeavor, and the willing consent of Takeshiro and Mikisaburo.

Oushu Saito and other participants gave Mikisaburo spontaneous themes to write poetry about. Mikisaburo wrote poems matching the themes while writing them in Japanese calligraphy and Takeshiro carved those themes in stone. They achieved creating 100 of them starting from 6am and finishing 8pm on the same day.

The 100 marks 100 poems that was completed this way was given to master Oshu.
The outcome of this elegant meeting was remarkable talent (superior talent that is beyond that of a regular human) from such incredible individuals, being a splendid achievement to cast immortal light onto the history of literature.

The Elegant Meeting of Writers and the Eight Views of Esashi

Seeing the old year out, Mikisaburo Rai stayed at Esashi. "the Eight Views of Esashi" that was contributed to the Ubagamidaijingu Shrine by the initiative of Oshu Saito and the 7 writers in May 1847 during the devotion to poetry through the deepening association of the Esashi writers, is something that should be specially mentioned.
Mikisaburo and the 7 writer friends chose beautiful scenery for the eight wins of Esashi City and its neighborhood, and the The Eight Views of Esashi was written in a quatrain with seven-word lines. Because it was written to recieve prayers for fishing prosperity from the Ubagamidaijingu Shrine, Mikisaburo sent it to Oshu Saito after returning to Kyoto, faithfully displayed regarding the placement and framing, writing each poem about the eight beauty spots on strips of paper, writing editors notes. It is a framed and displayed dedication to the Ubagamidaijingu Shrine, faithfully installed into a large framed work by Oshu.
The large framed works of the Eight Views of Esashi written with Mikisaburo's brush is framed and displayed in the shrine office of Ubagamidaijingu Shrine.

The Eight Views of Esashi Framed on Display