Work to make a town keeping history alive commenced in 1989. Work on the streets was completed in November 2004, and the streets underwent major changes as the Inishie (Antiquity) Highway in this historic town district. Henceforth, the area progresses to unification through various works breathing a new breath of fresh air into the district, with scenic architecture, signage, underground electric lines, sewer pipes, park maintenance other such things almost complete, the reformation of the streets with scenery taken into consideration is being pushed forward. 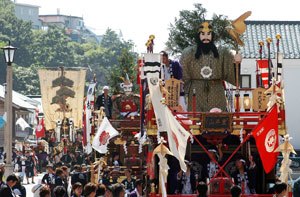 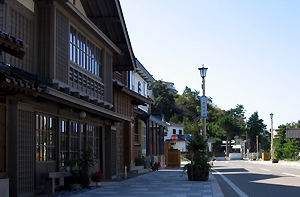 Esashi Town, one of the earliest opened ports in Hokkaido, visited by Japanese from long ago. There are numerous historic and cultural properties left in this town that was a base for the traffic of goods on merchant ships passing through the Sea of Japan since the 17th century, and prospered from herring fishing, herring trade, Japanese cypress wood. Work on the cityscape flowing with fragrant history, having visitors feel a sense of harmony, and continuing to forever convey the precious beauty of the scenery is progressing.
The Inishie kaido street is the core of the area along the old national highway of the whole area of Nakautacho and Ubagamicho.
There are wholesale dealers, storehouses, merchant family residences, townhouses, and additionally numerous places of worship, historic buildings, places and landmarks remaining here that were relevant to the trade of Japanese cypress and herring active flourishingly until the early Meiji Era. Exploring historic locations, the enjoyment of the simple beauty of tiled rooves and wooden houses, and the great flavors of the local area including soba noodles with herring when one parks their car and takes a leisurely stroll, along with the establishment of rest areas, and relaxing walking courses are being pushed forward.
The historical building, Esashi Town Meeting Hall (Former Town Office), is repaired and maintained, and serves as a free rest area, giving it the role of a sightseeing center.
When looking around the town, or taking a breather it is the perfect rest space.

Esashi boasted that it had more prosperous times in May than those seen in Edo (the old capital of Japan). Even compared with Hokkaido, Esashi saw Japanese visitors from early on, as a port town of the earliest opened ports. From the 17th century it continued to flourish until the early Meiji days as a base for goods-carrying merchant ships active in the Sea of Japan trading Japanese cypress, and from the fishing and trade of herring. In Esashi, with its long history, there are places of industry such as wholesale dealers, storehouses, merchant family residences, townhouses, and additionally numerous places of worship, historic buildings, places and landmarks remaining that were relevant to Japanese cypress and herring.
From the past in Esashi Town, since 1989, there is movement planning to activate to revitalization of these historic resources, work to keep the history of the town alive is being promoted through general chief maintenance using the area along the old national highway (with the popular name of Inishie kaido street) including the whole downtown areas of Nakautacho and Ubagamicho as an experimental area where many historic resources in particular, are being accumulated in town.
In the town, in 1996, the hometown Esashi cityscape conservation area regulations and the enforcement regulations affecting the whole town were established that established the necessary matters for the conservation of the historic cityscape that was a fundamental issue of the work for keeping the history of the town alive.
The purpose of these regulations is to create a unique cityscape making use of Esashi's cultural and historic resources, to make a town that is attractive to both local townspeople and visitors, improving the quality of the environment of the townspeople mentally and economically. It is designated as a cityscape conservation area that keeps history of the district alive, that has a remaining concentration of historic resources in particular.
Furthermore, planning preservation and maintenance is being made with storehouses and townhouses being designated as historic cityscape conservation buildings leaving a particular Esashi appearance in the area.